skip to main | skip to sidebar

Experience the sensation - without an implant!

Over the weekend, a close friend asked if a magnet could be glued to a finger and yield the same results as an implant. I had quite a few 'reject' coated magnets from shipping damage, so we proceeded to glue them to our fingers with small dabs of superglue. 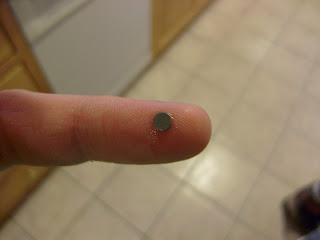 The result? It works! I placed one on my left ring finger, for comparison to my implant in my right hand in the same location. My friend used his index finger, and we both noticed sensations immediately.

My friend proceeded to run around the house looking for sources of stimulation. He cheerfully reported that he could feel fluorescent light ballasts, motors, transformers, and most everything else I could think to suggest. "It's like I'm getting a small shock!" he said, probing the field around a particularly torquey motor. "Great, now I'm going to have to get one of these implanted!"

In comparison to an implanted magnet, not surprisingly, the sensations are less pronounced, especially the pulling and pushing of permanent magnets. Oscillating fields are very noticeable, but feel "muffled." Overall the sensations are remarkably similar to that felt from an implant, so the experiment was a success.

The glued-on magnets fell off within an hour or two, so unless a more aggressive adhesive is used (which I wouldn't recommend for skin) long term attachment of an external magnet isn't too feasible. I'll be trying more experiments as well; my friend suggested attachment to the fingernail, which could produce some interesting results.

So if you would like a taste of the sensations a magnetic implant has to offer, grab a bit of superglue, some tiny (but strong) magnets, and try it out!
Posted by Unknown at 7:24 AM

Wouldn't it be possible to get a piercing on you hand. and then put in a barbell that has magnetic ends. So it would kinda be like an implant but you wouldn't have to worry about rejection because you could change out the magnetic ends for normal one when the tissue gets sensitive.

I bought some 1x1mm N45 neodymium magnets from ebay and they arrived today. Tried gluing a few of them on my nails, but I'm not sure if all I'm feeling is just placebo.

I'm planning on getting one or two inserted subdermally on my ring fingers, so it'd be important for me to be sure this really works...
I read that subdermal magnets take up to several weeks after insertion to work properly, but this shouldn't apply to magnets glued on fingernails, right?

The 1x1 magnets I ordered are not the same ones I'm gonna "install" anyway, so maybe the bigger 3x1mm Parylene coated magnets I'm planning to get will have a stronger effect?

Btw, someone really should order a big batch of the parylene-coated ones and sell them on ebay. Could be profitable and would make it easier for people not in the magnetic chemical mixer industry... I'd do it myself, but the shipping costs to where I live are insane; $125 for 200 magnets (which themselves only cost around $40 per 100)!